Road Hogs – Staying in the Left Lane Could Have Consequences

Road hogs or self-appointed highway vigilantes who drive at or below the limit in the left lane to slow would-be speeders face consequences. By holding up traffic, you not only risk a ticket in most states, but you’re also forcing the driver behind you to grow frustrated and angry. The result could be raising the potential for a serious accident as he or she tries to get around you by conventional or even non-conventional means. 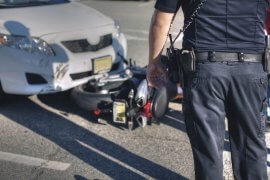 With an uptick of 9.3 percent in traffic fatalities in the first nine months of 2015 nationwide, according to the National Highway Traffic Safety Administration (NHTSA), adding more hazards to our highways to reduce speeding deaths is not the answer. In fact, it’s counter-productive.

Currently, 29 states, which include California, Arizona, New Mexico, and Texas, require a vehicle moving slower than the normal flow of traffic to surrender the fast lane for one of the lanes to the right. Regardless of your own speed, should the pace of traffic be faster than you are driving, you have to move over.

Meanwhile, 11 states designate the left lane for turning or passing only and the remaining 10 states require a driver to yield the left lane to faster traffic, to match the speed limit or to keep pace with surrounding traffic. 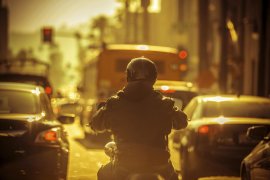 Before you decide to play traffic cop, consider this – it’s not your job to block speeders by hogging the left lane. You’re not only putting your own life in danger by impeding them, but you’re endangering the lives of everyone on the road, including the speeders’ themselves. Should your actions cause a serious accident, you could be held responsible, leading to higher auto insurance rates and possible lawsuits.

Another statistic to note – 10% of all traffic crashes occur during lane changes. It doesn’t matter whether you’re maintaining the speed limit, driving above it or below it, vehicles will attempt to pass – often without signaling – and even more so, if you’ve made their blood boil in your effort to slow them down. 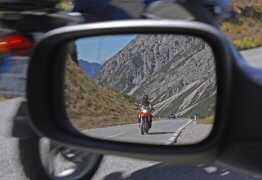 Don’t be part of the problem

In short, don’t become part of the problem by making a bad situation worse. Adding to the possible risks of causing an accident resulting in vehicle damage, injuries or death should be avoided at all costs – and not just because of what it might do to your car insurance. Let the police do what they do best – pull over speeders and drivers who drive recklessly at the disregard of others.

Here’s a simple rule of thumb – if surrounding cars on your right are passing you, get out of the left lane and move to a lane on the right when it’s safe to do so. Then pick up the pace to avoid creating a dangerous situation in the right lanes and forcing other drivers to dodge you there as well.

In the end, worry about staying safe behind the wheel and less about what the other guy is doing. Remember – you can always get out of the way and let them pass.

The Real Cumulative Cost of an Auto Insurance Claim

Double Down on Las Vegas Licenses

What’s with the kale craze?