Stiff Neck and Back? Maybe Your Smartphone is to Blame

A funny thing happened on our way to the technology age – we now suffer from more physical ailments than prior to it. Well, that’s not entirely true. Tired, blood shot eyes and stiff necks have been around for thousands of years. Of course, whenever possible we’ve shrugged them off on our lack of sleep or having simply slept wrong. 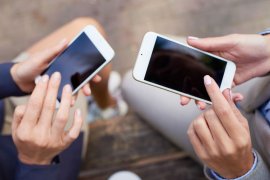 How your Smartphone may be harming you

As it turns out, your Smartphone could be the culprit with more and more people complaining of neck aches, according to health insurance statistics. Therapists have even come up with a name for the spreading affliction – “Text Neck.” And, chances are you’re a sufferer and weren’t aware that the mobile device you hold in your hand and stare at a major part of the day – while texting, emailing, calling friends or business associates, and playing app games for hours on end – may be harming you.

Because you generally tilt your head forward to use a mobile device, you’re putting a strain on your neck muscles. Prolonged slumping or hunching can also lead to inexplicable backaches or headaches without considering the actual cause. Gamers will be the last ones to admit those neck cricks and achy shoulders are related to their hand-held devices – but, they may very well be the source, according to healthcare professional Dr. Dean Fishman. 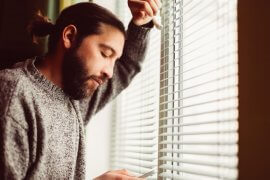 The origin of the term “Text Neck”

Fishman was the first to coin the term “text neck” in 2008 while examining and trying to diagnose a 17-year-old patient, who had been complaining of headaches and neck pain. When Fishman glanced over at his patient and saw her posture as she was sitting, hunched over, and texting, he knew he was on to something.

In a recent survey conducted by New York spine surgeon Kenneth Hansraj and published in Surgical Technology International’s 25th edition, it was determined that texting may be hurting your back. The study went on to explain that bending your head at an angle to perform any number of functions on your hand-held device can put up to 60 pounds of pressure on your neck. 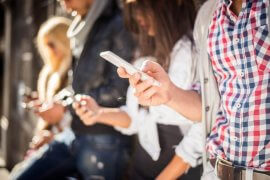 According to Hansraj’s study, the more severe the angle of your head to look at your device – 15, 30, 45 and 90 degrees – the greater the risk of eventual neck, shoulder, and back pain. Furthermore, “the average human head weighs 10 pounds in a neutral position – when your ears are over your shoulders – and, for every inch you tilt your head forward, the pressure on your spine doubles”.

Hansraj recommends that you “be careful that your head is straight up when you’re using a smart device.” But, that’s easier said than done. Most people become so absorbed in their mobile devices, they’re not thinking about the positioning of their heads or where they’re going.

Not only does tilting your head forward cause nerve pain, according to Dr. Michelle Collie, director of Performance Physical Therapy in Rhode Island, but it can also create metabolic problems. 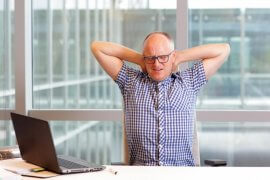 Experts say slouching can reduce the capacity of your lungs by as much as 30%. In addition, they say a lack of oxygenated blood flowing through the body can potentially lead to vascular disease. And, gastrointestinal problems can be caused by pressure placed on the organs in a bad posture.

As much as some of us would like to, we can’t just give up our mobile devices. But, for those of us who believe in preventive medicine, we can follow the recommendations of physical therapists, who advise taking frequent breaks while using any hand-held device.

Tests have shown you’ll improve blood flow by standing up and rolling your shoulders and neck every 20 minutes or so. Sounds simple enough – if you remember to do it.

Millions of Homes at Risk for Storm Damage

Getting a Flu Vaccine This Season? This Drug Could Impact Its Effectiveness