There’s no denying that ride-hailing services Uber and Lyft have become extremely popular in the Southern California area in the past few years. What’s also undeniable is the fact that both services have dealt a devastating blow to the Los Angeles taxi industry.

A recent report of city records shows that in the three years since Uber and Lyft began operations in Southern California, the number of taxi trips arranged in advance has taken a 42 percent plunge. And, the total number of trips has also fallen by almost 30 percent with the biggest drops taking place in the city’s most popular nightlife and tourist destinations, including the Westside, Hollywood, and downtown. 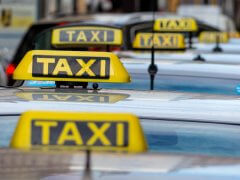 After decades of dominance, L.A. taxi companies are facing fierce competition from the app-based transportation start-ups. While taxis are regulated by local governments from the price they charge to the color of their cars, Uber and Lyft don’t have to abide by the same regulations.

But, the decline isn’t isolated to the Los Angeles area alone. In fact, San Francisco, the corporate home of both Uber and Lyft, has also experienced a dramatic shift in the total number of trips taken per taxi, dropping by more than two-thirds over a two-year period.

Although taxi companies in other cities across the country, such as New York, Boston and Washington D.C., are struggling to compete head-to-head with the cheaper app ride-hailing services, the decline in the number of taxi trips hasn’t been as steep. 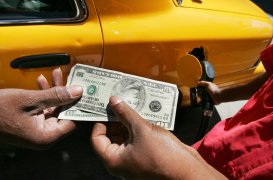 However, those feeling the greatest pinch are the taxi drivers themselves. According to taxi commission President Eric Spiegelman, a typical cabbie sitting behind the wheel full time used to take home about $40,000 a year after taxes and fees, which include paying to rent their vehicles and dispatch systems from the city’s nine licensed cab companies.

As the number of trips they’re making has fallen by as much as 40 percent for many drivers, so has their income, says Paul Ezadjian, a manager for LA Checker Cab. And, according to Ezadjian, the decline seems to be accelerating in many areas. 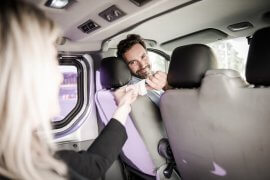 News not all bad for taxi industry

While the taxi industry has been hard hit in some areas of Southern California by the influx of Uber and Lyft into its territories, the news isn’t all bad. If the data out of Los Angeles International Airport (LAX), a stronghold of cabbies for decades, is accurate, taxis have actually increased their trips at the airport by 41 percent since the arrival of the two independent services.

Because trips that begin at LAX are generally longer and more lucrative, they offset the revenue loss from the decline at other locations to shorter destinations, and more taxi drivers are using it as their new base of operation.

Still, only time will tell if taxis will maintain their dominance at the airport now that Uber and Lyft were given the green light to pick up passengers there too, following a fight with City Hall officials. Preliminary numbers show the two ride-hailing companies are picking up an average of 24,000 rides per week. 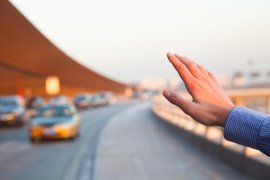 Co-existing at the airport

Given the current data, taxi commission President Spiegelman believes there may be enough travelers exiting LAX to provide a sufficient market need for both cabbies and Uber and Lyft drivers to co-exist.

If you’re a ride-share driver, familiarize yourself with the auto insurance coverage your company provides, because it typically only covers you when you’re transporting passengers. So, you’ll still need car insurance and liability coverage for the personal use of your own vehicle.