Why Cops Have No Trouble Knowing You’re Texting and Driving

On our daily commute we’ve all seen drivers ignoring the “hands-free” law, talking and texting while sitting behind the wheel in traffic. In fact, you may be one of them. And, let’s face it, many of us have done it and some of us will continue to do it, because we think we’re smarter than the cops who are supposed to nab us for breaking the rules. 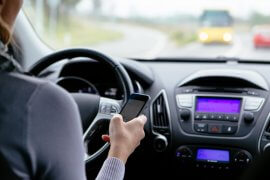 In reality, which is where tickets for violations are handed out, cops, for the most part, have no trouble knowing you’re texting or calling your girlfriend while driving.

And, sadly, despite the laws, a large number of drivers insist on texting and driving, regardless of the risk of injury or death to themselves or other drivers – or the effect an accident could have on their freedom, driving privileges, and auto insurance rates.

According to a 2013 survey conducted by AT&T, 98 percent of respondents said that texting while driving was unsafe. Of those questioned, almost half admitted to driving and texting. Currently, the Insurance Institute for Highway Safety reports that 46 states and the District of Columbia have banned texting while driving.

You’re not fooling anyone

For those of you who might think you won’t be caught, you may want to reconsider. Just because it hasn’t happened yet doesn’t mean you’re out-smarting the cops. The fact is, cops use discretion when deciding to bolt after a guy with a cell phone glued to his ear.

Here are a few reasons why you’re not fooling the cops: 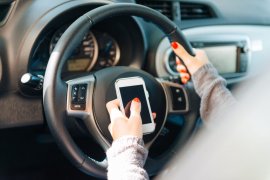 Although a lot of drivers believe it’s a good way to conceal it from a passing cop, some blatantly refuse to hide their cell phone. But, a cop can easily drop behind you and after a mile or two confirm what he suspects – you’re on your phone – texting. 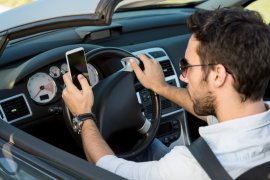 Unless you’re a bobble head doll, this is a dead giveaway. Constantly glancing down to your lap, steering wheel or off to the side will automatically draw an officer’s attention. Each time you sneak a peek at the screen, you’re giving yourself away. 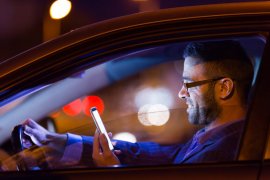 Seriously, if you insist on using your phone to text, check your Facebook page or send an email at night, there’s no way you can hide the fact you’re on your cell phone and guilty of distracted driving. Regardless of how bright your screen is, a cop driving anywhere around you will notice what you’re doing and probably give you some unwanted paperwork to sign. 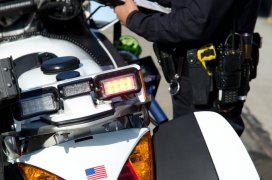 There’s a reason why you’re more likely to get pulled over by a motorcycle cop and given a ticket. They have the advantage of being able to get in close and peer through the window by riding alongside your car. If your cell phone is anywhere in sight, he has the prerogative to cite you. 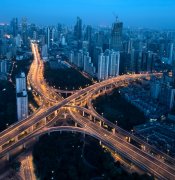 In some states, a variety of methods are being considered, including setting up spotters on overpasses to look for people texting and driving. California isn’t one of those states, but nothing is to say that a CHP or city cop isn’t crossing an overpass only to spot you from above dialing or texting, especially at night.

Luckily, in California a citation for using your cell phone won’t cost you any points on your DMV report, because it isn’t considered a moving violation. While the majority of the state’s car insurance companies don’t regard this as a major offense, get more than one violation for distracted driving and they may take a closer look at your driving habits and the increased risk of you being involved in a serious accident. So, don’t push your luck.

Remember – your life isn’t the only one at risk when you text and drive.

Could an “Exercise Pill” Eliminate the Need for Gym Workouts?